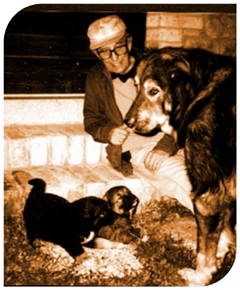 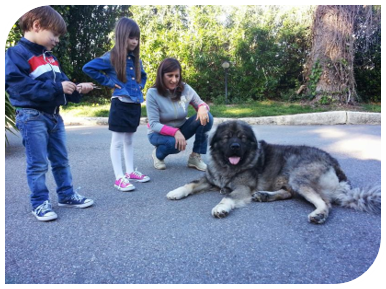 The Caucasian Shepherd is a large breed of dog breed, very popular in Azerbaijan, Russia, Armenia and Georgia. The Caucasian Shepherd has elements that unequivocally distinguish the breed, like the hanging pendant of the tail downwards, similar in shape between a scythe and a hook. The coat is colored by various shades of gray, reddish and straw. It can be spotted, spotted or completely white, experts say that black is a serious aesthetic defect. The coat is rough and perfectly straight, with a thick undercoat. There are three varieties of hair in the Caucasian shepherd: short-haired, long-haired with mane and long-haired without a mane.
The short-haired Caucasus shepherd requires basic care to maintain a beautiful coat, while the other two varieties require a lot of care to avoid unsightly and annoying knots. The head is overall very massive, the forehead is wide, flat and divided into two halves by a slight furrow. The eyes are small, oval-shaped, usually dark brown or black.
The story of the Caucasian Shepherd is uncertain and the subject of fierce debates among experts, in reality, there is no written evidence and irrefutable evidence on the origins of the Caucasian Shepherd. The theory with greater credit says that the breed originated from the union of a Tibet molossian with a flock dog from Asia, from which it inherited the dappled mantle, present in some subjects, and the shape of the snout, while some characteristics, like the round eyes, have been lost. It has spread all over the world thanks to the nomadic peoples of Asia, merchants and military troops. In each area visited, specimens were established, which, by coupling, gave rise to other specimens, and so on, creating subtypes such as the Georgian, Armenian, Cazbek and so on. The selection of the breed began in the area of ​​the former Soviet Union, which allowed to reinforce certain characteristics, such as physical strength, great safety, courage, a very fine hearing, the very acute sight and its beautiful coat, and a great resistance.

The era of the Caucasian Shepherd came as an aid to protect and look after the house, as well as to drive away unwanted visitors. The first examples, in fact, were an aid to the arms of the Tsar, because, thanks to its thick and waterproof coat, it can withstand harsh climatic conditions. Beyond the selection made, no mixtures were made with other dog breeds, a cause of the localized area of ​​the Caucasus where this particular breed originates. That is why the Caucasian Shepherd still retains all the original features, without the contamination caused by mating with other races.
It is a success in 1952, when all the States belonging to the former Soviet Union gathered to make a detailed list of the breeds present on the territory, both to identify the main dog breeds, and to select those to be used more. A few years later it became the first training school for this breed race, which is still working. Unfortunately, with the passing of the years the specimens have become impoverished of some characteristics, but they have strengthened the others. Only after 1970, the Caucasian Shepherd spread throughout Europe, appreciated in Germany and the Netherlands. Each kennel has different characteristics: Tambov's dogs have faced a lot of height, a much sturdiest backbone, a much wider chest; as defects, eyelids and lips are not perfectly adherent.
The breeding is the most important: the dogs bred in the area are considered by experts the representatives of the pure Shepherd breed of the Caucasus. Although the man has taken care not to mix it with other races, these specimens are considered neither a selected race nor a spontaneous race. Russian experts like to define these primary terms have remained unchanged over time, even if the selection is natural or improved certain physical and character elements.
In Italy it is a little known breed, even if there are many farms and many specimens come from Russian breeding (there are more than six hundred). The breed has a millennial history behind it, which can be perceived when one is in the company of these extraordinary animals. Who wants to adopt a specimen, does not have to do anything but contact the breeding closest to his house, there are all over the territory. The prices of the various litters vary according to the same and the so-called "optional", but in principle are around 850-1200 Euro, including certification of the breed, certain provenance, vaccinations provided for by Italian law, microchip already inserted and worming completed.
As a rule, puppies purchased on farms can only be withdrawn once weaned: it is not good to remove a baby from the mother, especially if she is still breastfeeding, because you need to be highly qualified to take care of a puppy a few days, but this applies to every canine breed. Those who bring a puppy home must allow time to settle in, respecting the spaces and the character of the dog. Before buying a Caucasian Shepherd, it is good to evaluate what you can offer him, a dog is not a teddy bear to be shown to neighbors and relatives, but a living being that must be respected and loved.